Finally, how to make more time! 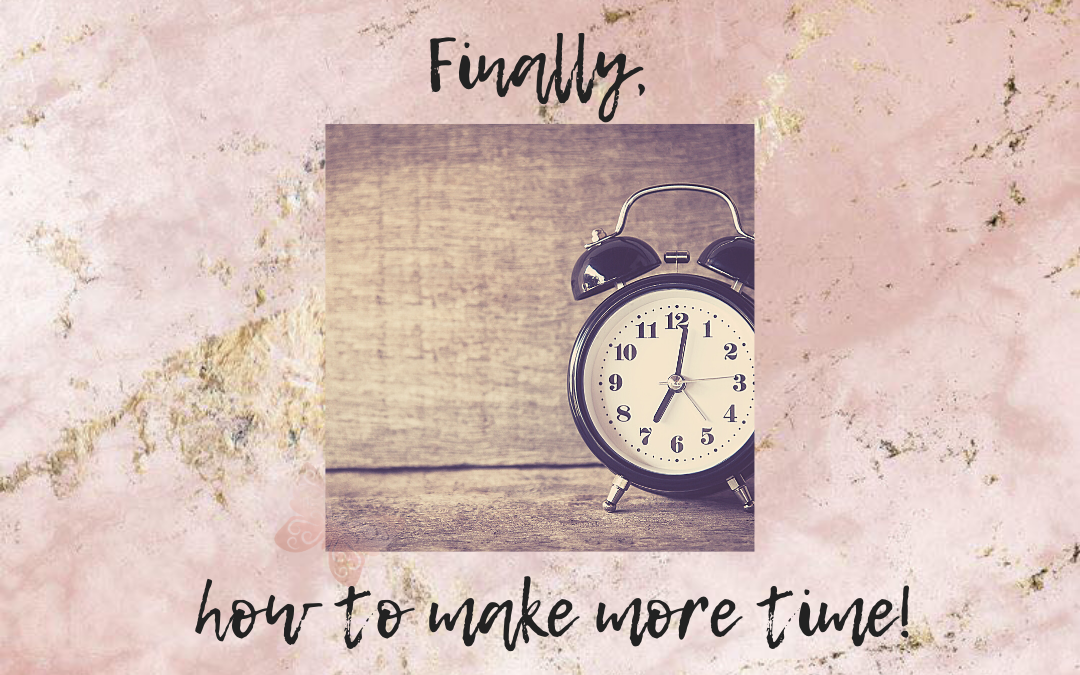 Time is what we want most, but use the worst – William Penn

These past few weeks I have found myself feeling so trapped and stuck and getting more and more frustrated at the same old situation.

“I just don’t have enough hours in the day to get everything done” I was spending my days moaning and moaning about my huge lack of time. Time was running away with me, time was not on my side. I just didn’t have time.

I was getting more and more frustrated as time went on. I was saying the same complaints to the same friends, and I was getting the same results. Still not getting a feeling of having a productive day where I got everything done and had time to do it.

I am so trapped

I had had my children years ago, my youngest was in her last year in primary and I was running my business from home. My 3 children lived with me half the time and their Dad the other half. So, I had lots of time. I was time RICH!  I had time to myself, time to work, time with the kids, time with my partner. I had time. If time was money I was a billionaire.

Then all of a sudden Aurora chose me to be the carrier for her miracle. Despite having been told 3 years previously that I was unable to have anymore children. Suddenly here I was to a mum of a 14 month old baby! I feel like I have blinked and my whole life has taken a 360 spin! It’s like I was watching a film and someone came in and secretly changed it to a different film.

Now I have no time for anything !

I love my warrior princess to peaces and she has completed and saved me in so many ways. But I wasn’t expecting nor did I plan to have such a huge gap between my older 3 children. Nor did I plan to be running a business with a baby. This new school year, I have a son in college, and two daughters in year 7 & 8 the hormones are rife right now. Now throw in a teething tanting toddler who is 15 months old!

I forgot how hard having a toddler is and I forgot just how incredibly demanding they can be also.

Yes, things are a little tougher because as I write this we are still in the midst of Covid 19, lockdown is over, well sort of but we are still not able to go in each others houses and things like that. So, childcare or family having Aurora just isn’t an option right now. But that really is besides the point because even if we wasn’t I still am not one of those who has all these family on tap waiting to babysit.

Now, I am up earlier than I have been in a long time yet I feel like my days disappear in a nano second. Some mornings it can take me an hour before I even get my cup of tea!

So to now be trying to run a business and a house while also juggling three older children it just feels like I am trying to run the wrong way on a treadmill. I was talking to a friend the other day and said ‘I don’t even have time to blow my nose, snot is running down my face as I try and answer my messages!’. I mean come on how ridiculous is that!

Something has to give!

Enough was enough! I went to bed the other night and laid there and thought right I can not keep doing this. I can not keep letting my days go in the blink of an eye and feeling so unproductive like this. Having fed children and a clean(ish) house is not what I want my life to be. I have more to be doing!

So, I asked myself a non negotiable question…’how can I make more time?’

Now, don’t get excited, I haven’t got the secrets in this blog to a time machine that I am offering to sell you for the price of your life! But I have found the solution!

Now, already this will be met with some resistance, and that’s fine, this is still your block and that is why you are reading this, hoping to find the answer. But I am here to tell you there is no point in looking elsewhere YOU ARE THE ANSWER!

I realised that I wasn’t making good use of my time. I had things I couldn’t just not do anymore. There wasn’t really anything I could delete. I mean what was I going to do, delete my baby? or stop running my business?

But I had to find an answer, I just can’t go on like this.

So, I sat with my pen and paper and I evaluated my days. Where was all my time going I asked myself. This simple journal task enabled me to make some huge tweaks. Sometimes just literally swapping things around, made a big change.

For example; I was waiting to get the baby down for her morning nap before I would do my workout, which was rushed and always in the worry that she will wake up before it was finished. I no longer got my usual enjoyment from it. I would then have to rush a shower and getting ready too and then immediately onto sorting lunch. Afterwards I felt like I had run a marathon! But, I realised, I could workout while the baby was up. I had done plenty of workouts where she had woken before I finished so I had brought her down and she had played with my resistance bands or just crawled about while I finished. So, why was I not just working out first thing after breakfast. Because I wasn’t getting any productive work done during this time either, it just didn’t feel long enough to get my teeth stuck into something. Now, I workout in the morning while she is still up and she doesn’t get in my way no where near as much as I thought she would. She is now used to knowing if I have my exercise clothes on it means music on and her fave tv show plus she gets to play with my bands or pilates ball. I workout and then put her to bed and I can then work uninterrupted for at least an hour! I get so much done in that hour now!

I have also made plans that once covid is settled the older children will get themselves home from school and college so this will again free up even more time.

So, you see when we decide we want more time. We can make it. It is ours to make, we just have to get out of our own way to make it. Just that one simple change of when I did something, made me feel like I had so much time even though I hadn’t given anything up. It is you that is in your own way and blocking yourself from time. When you accept this and look for solutions instead of moaning about lack of time, change will happen, you will find more time.

See what you can do if you evaluate your day, if you set yourself a non negotiable goal to find an hour in your day for that thing you have been meaning to do for ages!